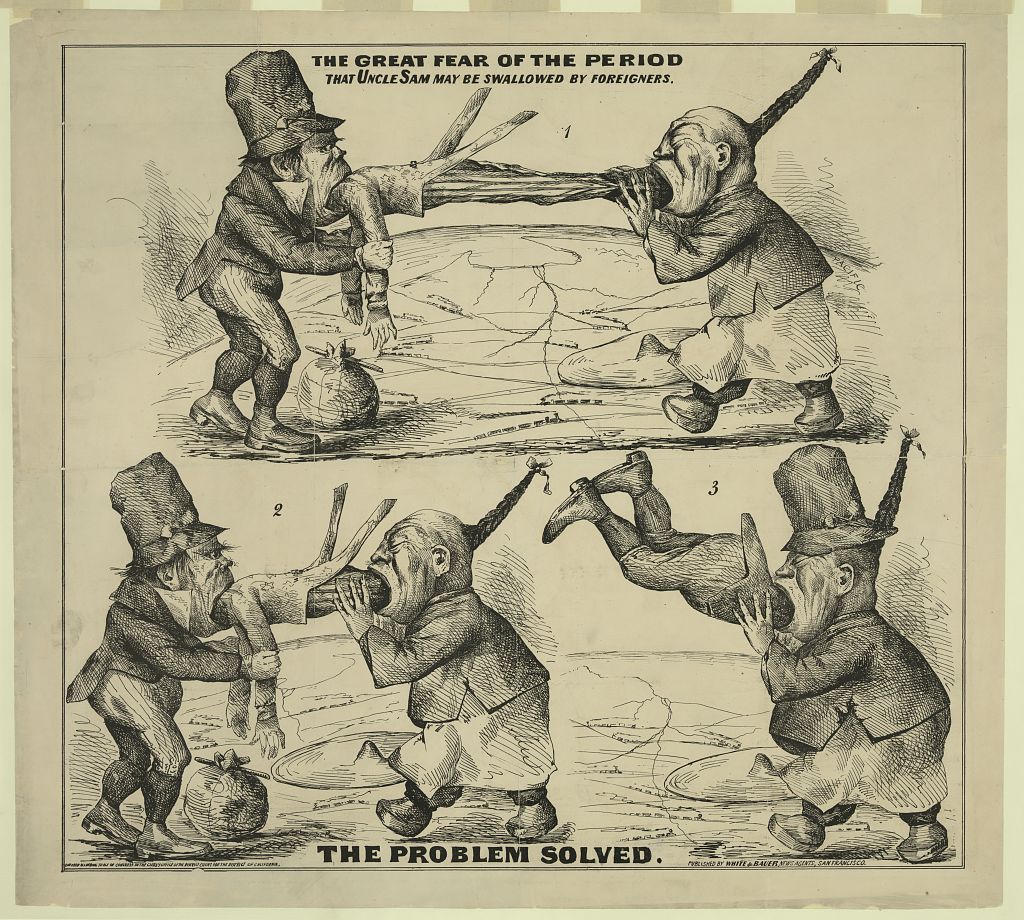 This 1860s illustration is entitled, "The Great Fear of the Period." Given that Civil War and Reconstruction dominated the decade, it seems strange anyone then could think of immigration as a major concern. Yet, fear that the country was being consumed by foreigners, namely by the Irish and the Chinese, was particularly strong in states like California and Utah.  In this cartoon, the two chief rivals of mid-19th century foreign labor, the Irish “Paddy” and the Chinese “coolie,” stand astride a sketched landscape of America as they compete to swallow Uncle Sam whole. Not only does the Chinaman consume most of Uncle Sam, but he also eats the Irishman, his jacket bursting at the seams as he wears Paddy’s hat. Both immigrant groups were criticized for underbidding native-born labor and for their willingness to work under what Americans considered sub-human conditions. By the 1860s, the Irish had done most of the work on the railroad in the eastern part of the country. Many then sought to work on the western portion of the Transcontinental Railroad. “The Last Spike” ceremony outside of Provo, Utah, marked the completion of the line on May 10, 1869.

In 1881, painter Thomas Hill offered a retrospective and romanticized interpretation of the same occasion. He depicted railroad baron Leland Stanford driving that final spike. At least a couple of Chinese workers can be seen in the foreground (holding shovels). Stanford, who became governor of California in 1862 spoke out against the Chinese as an inferior race whose presence would have a “deleterious influence” on American society, but this did not deter him from importing thousands of Chinese men as cheap labor. The good governor would go on to found Stanford University with a generous endowment no doubt deriving from his railroad fortune.

Ironically, 1881 marks the year that Congress passed the Chinese Exclusion Act, which forbade the immigration of Chinese workers to the U.S. Both native American and Irish-born laborers supported the ban. In fact, Irish-born union organizer Dennis Kearny agitated against all immigration from Asia. The Irish had grievances in common with the Chinese—both were sorely exploited—but the Irish saw the Chinese only as competitors. As for Americans in general, they feared and distrusted the “Chinese coolie,” believing that Asian labor would lower living standards for native-born workers. 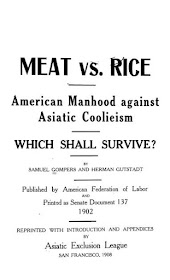 This belief was suggested by the title of union leader Samuel Gompers’s book, “Meat vs. Rice?” Gompers was himself an immigrant (from England) and a champion of the working man, but he opposed Chinese immigration. As has so often been the case with America, just as one wave of immigrants starts to find its feet, a newer, hungrier wave follows. The newest arrivals are willing to work for less and under harsher conditions. This, of course, discomfits those who came before them. In 1892, the Scots writer, Robert Louis Stevenson, traveled America's Far West by rail and commented on such anti-immigrant feeling, “Awhile ago it was the Irish, now it is the Chinese that must go.”

Of course, Chinese workers were already barred from entry. Not until after World War II, when the exclusion law was lifted, did immigration from China become numerically significant. In 2018, China displaced Mexico as the top country of origin for new immigrants to the U.S. In the wake of the declining relationship between China and the U.S. during the Trump years, we can only guess how immigration from China will fare under the Biden administration.
at December 02, 2020 No comments: