Mr. Dooley and the Birds of Passage 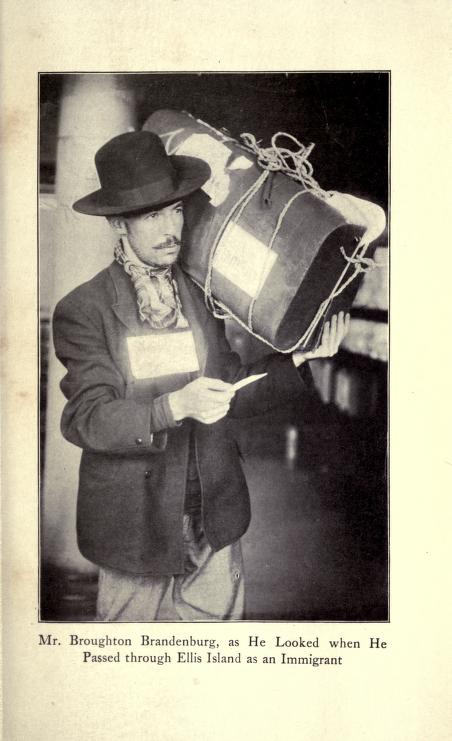 I recently came across a wonderful anecdote in a book written near the height of early 20th-century immigration to America.  In 1904, journalist Broughton Brandenburg published Imported Americans, documenting his and his wife’s experiences posing as immigrants from Sicily. Leslie's Magazine had financed their adventure, sending them to Italy, where they lived for a few months before making the voyage back to America in steerage. Brandenburg’s book described the entire experience, from the couple’s language and cultural orientation in New York’s Little Italy to the screening they passed through at Ellis Island on their return. Brandenburg illustrated the book with sixty-six of his own photographs.

One of the small stories Brandenburg tells gives insight into an important aspect of Italian immigration, the “Birds of Passage” phenomenon. One morning in a village outside Messina, Brandenburg is awakened by the voice of a child singing. The child is picking grapes in the vineyard below Brandenburg’s window. Brandenburg knows the song, but he's flummoxed to be hearing it here. It’s a popular American tune called “Mr. Dooley,” named for a comic Irish-American character created by Chicago newspaperman, Finlay Peter Dunne.

These are the days before radio. The song is best known via sheet music and an Edison recording sung in a thick brogue by an Irish tenor. But “Mr. Dooley” now comes to Brandenburg's ears under entirely different auspices. Journalist that he is, Brandenburg rousts himself from bed and ventures into the vineyard to find the source. The singer turns out to be an eight-year-old Sicilian boy who lived for two years in New York, where his father had contracted tuberculosis while working on the subway. The family had recently returned home so that the father might recover his health, but the boy tells Brandenburg that as soon as he’s big enough he’s going to run away and sail to America where he can go to school and make money selling newspapers.

Few Americans today realize that many immigrants, particularly during the Ellis Island Era (1892-1924), returned to their home countries. This was especially true for those from southern and central European countries. Italians had among the highest rates of return. More than forty percent went back.  They were thus described as “birds of passage.” Their reasons for return were many. Most were single men, who had traveled to the United States to work for a time and save enough money to get married, buy a plot of land, and build a house back home, where it was said they could live like Rockefeller. They were “target laborers” who never planned on staying in the United States. A few even made repeated trips, arriving in the spring and returning in the winter. During the sailing ship era, this would have been almost impossible, but the advent of the steamship made passage cheaper, faster, and less grueling.

"The Immigrant. Is he an acquisition or a detriment?" An Italian laborer is the center of attention. Immigration from Italy was reaching its peak in 1903. For the first time in US history, annual immigration was exceeding one million. Artist: Victor Gillam, Judge Magazine, September 19, 1903. Courtesy of the American Social History Project

Americans hated this return migration. They accused the Italian laborer of exploiting their hospitality, caring nothing at all for the country that was treating them so well! In fact, a good many of the return immigrants went home as broken men. As one said, “America took us in, chewed us up, and spit us out.” These were the days before “workman’s compensation” and occupational safety practices. Injuries and deaths were common for laborers, especially those who did the dirty, dull and dangerous work that was the Italian’s lot in America.

Debilitating disease also sent many back, as was the case for the young singer’s father. The Italian immigrants lived disproportionately in America’s eastern seaboard cities. Many dwelled in tenements, where contagious diseases, particularly tuberculosis, thrived. At congressional hearings in 1924, witnesses said that Italian immigrants wanted to go home as soon as they had contracted the disease. Some must have believed that they would recover more quickly at home. Others returned in order to die. It was said that the hospitals and sanitariums in Sicily were crowded with tubercular patients returned from America.

No matter what the reason for return migration, Americans said they despised it. Their complaints were not unlike the complaints against Mexican immigrants today. They said the newcomers were nothing like the immigrants of old who had helped “upbuild” the nation. They accused the Italians of remaining loyal to the old country while acting with mercenary motives toward America. The birds of passage, the critics said, cared only for money, which they would take out of this country. Even worse, Americans believed that because the Italian laborers sought only to save enough to live well in Italy, where it was cheap, while in America they would take any kind of job, submit to the worst exploitation, and live under horrid conditions to achieve their target. In sum, the birds of passage were an affliction for the honest American working men.

In the Sicilian village where Broughton Brandenburg stayed, ten percent of the population was away in America and the movement between countries was quite regular. Immigration from Italy to America grew explosively in the late 1800s. The U.S. Census of 1850 counted some 3,600 Italians in the entire country.  In 1903, the year Brandenburg visited southern Italy, more than 230,000 Italians arrived. Between 1900 and 1915, a total of 3 million migrated. As this stream of newcomers matured, fewer repatriated. Instead, those single men who had pioneered the process were joined by family and friends. Many birds of passage sent for fiances or wives, settled down and became full-fledged Americans. Whether that young boy who sang outside Brandenburg’s window ever returned to America we may never know, but I like to think he did.