How the Klan Copied the Catholics 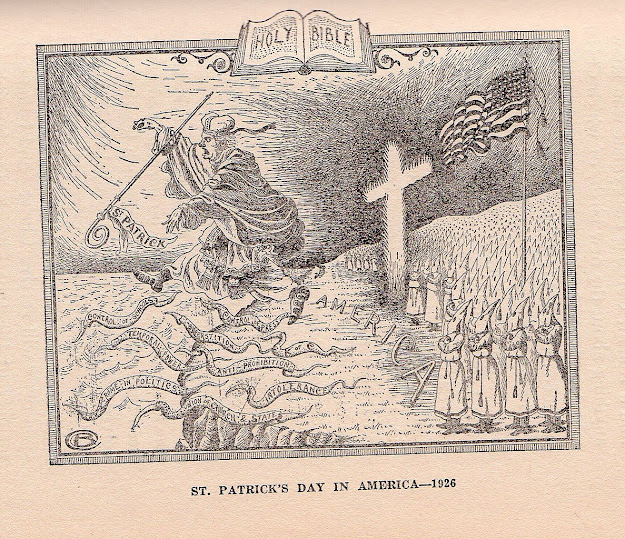 After the riots at the U.S. Capitol last January, white supremacist organizations like the Proud Boys and Boogaloo Boys have gotten a lot of media attention, but America’s oldest and most infamous hate group, the Ku Klux Klan (KKK), is rarely mentioned. Is it that the Klan just ain’t what it used to be?

Many Americans are familiar with the Klan’s history of intimidation, violence, and murder against African-Americans after the Civil War (1861-1865). The Klan declined in the late 19th-century under pressure from the federal government, but it reemerged in 1915, expanding in reaction to the movement of Blacks and immigrants into the cities of the North and Midwest.  While the KKK maintained an abiding hatred for Blacks, it added immigrants to its enemies list, because those coming through Ellis Island at the time were non-Protestants, notably Roman Catholics and Jews.

The KKK was not the first organization to oppose the entry of Catholics into the US. As early as the 1840s, the American Party (aka “Know-Nothings”) warned that Irish-Catholic immigrants were under the control of the pope, who sought to take over America. Nativists observed that the “Romish Church”—a term then used—was organized like the military. The Pope was its commander-in-chief. He demanded unquestioned loyalty from a hierarchy of cardinals, bishops, and priests. In turn, this clerical hierarchy held sway over the immigrant masses and dictated how the newcomers would vote.  Once the immigrants had achieved overwhelming numbers, they would rise-up at the Pope’s command and transform the United States into a theocracy.

This alien religion, they said, was nothing like American Protestantism. Steeped in egalitarian traditions, Protestant believers owed allegiance only to the Lord Jesus. The Klan and other nativists also ridiculed the ostentation of Catholic religious practice. They mocked priestly vestments, the use of incense and holy water, the veneration of saints, and the deference shown Catholic prelates. All of this was described variously as “mumbo-jumbo,” “pope’s toe-ism,” and “idolatry.”

It now seems obvious that the Klan, in making such criticisms, lacked self-awareness.  Just look at their regalia. Klansmen may have declared themselves fiercely opposed to papists, but that that did not stop them from wearing gowns that mimicked the garb worn for ages by Catholic “penitent societies” in the countries from which the immigrants the Klan so despised came. So closely do the two resemble each other that the BBC recently used photographs from Ku Klux Klan ceremonies to illustrate a story on Catholic brotherhoods in Spain.

Other aspects of Catholicism that were anathema to evangelical Klansmen were the complex hierarchy and elaborate rituals of the Church. Hadn’t the Reformation rejected these trappings in favor of a spiritual return to the Gospels? True Protestantism would be egalitarian and austere in practice. Yet, when the Klan was going strong in early 20th century America, its rallies were notable for elaborate rigamarole and pageantry—burning crosses, flaming torches, solemn processions, and somber hymns—all presided over by a hierarchy of officers with arcane titles like “Grand Dragon” and “Imperial Wizard.”

A father and daughter, perhaps African-American tourists, pose in front of a Holy Week procession in Spain. The young woman looks upset at the resemblance the penitents bear to Klansmen. Her father seems to recognize that the similarities are superficial. Image courtesy of lipstickalley.com

Isn’t it ironic then that at least in its outward trappings the KKK adopted two medieval aspects of the Catholic Church it hated so much? No sane person would welcome the Klan's replacement by the likes of the Boogaloo Boys, but one can wish the hateful and anachronistic organization good riddance.